A trauma doesn’t only happen to one person – it happens to everyone around them.

Megan Smith-Morin began recalling the day that her and her husband-to-be’s life would take a sharp unexpected turn. Her husband, Mathieu had suffered a work accident, falling from 35 feet high above the ground.

“The day I got the call was on May 1, 2014. I was at work; I remember specifically the patients that I was seeing. Human resources from my then-fiancé’s work called me and they told me that Mathieu had a major accident and that I had to come to the Montreal General Hospital,” explained Megan Smith-Morin, Occupational Therapist at the Montreal Children’s Hospital.

Everything from receiving the call, to getting into a cab, to running through the Emergency doors, being greeted by a police officer and a social worker was a complete blur for Megan. The emergency doctors had their work cut out for them; Mathieu almost didn’t make it through the first few hours after his accident. He was to undergo blood transfusions and surgery to stabilize him. As Mathieu was in surgery for five hours, Megan and Mathieu’s family were escorted up to the Intensive Care Unit at the Montreal General Hospital where they were kindly attended to by Bita Danechi, nurse manager on the floor. “She stayed with us, brought us water, Kleenex and food. She was very present for us. It was a pleasant surprise to see how great the ICU is at providing single patient rooms and care from excellent doctors and nurses.” 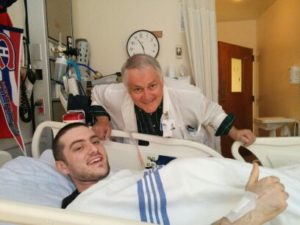 Mathieu suffered a polytrauma. He had a traumatic brain injury along with multiple fractures that required services from the Trauma team, Neurosurgery, Orthopedics, Plastic Surgery, Ophthalmology, Nephrology along with allied health services such as Occupational Therapy, Physiotherapy and Social Work. He had multiple surgeries to correct his fractures to his body and his face. He was admitted to the ICU for 3 weeks and then was transferred to the 12th floor where he was admitted for one month.

Mathieu does not recall the accident. His first memory after the accident was his birthday celebration on June 5, as multiple friends, family and MGH staff made sure that his birthday was well celebrated. He remembers waking up in the Hospital, feeling confused and unaware of his surroundings.

“It was hard on everyone, especially my fiancée; not knowing if I’d come out of it – and if I did, how would I be? Would I have the same cognitive level as before? How would I be in a few months?” questioned Mathieu. “Without the tireless efforts of the Level 1 Trauma Centre staff, alongside the dedicated work it took on my end, I would not be where I am today; living at home, working, newly-married and able to enjoy life. For sure, I live daily with consequences of a brain injury and multiple fractures but life goes on.”

“This kind of accident never leaves you. On a daily basis, you always think of what you’ve been through. The hospital staff gives you the world – that’s their job but yet they do it with such dedication – and as patients you always remember them,” expressed a teary-eyed Megan. 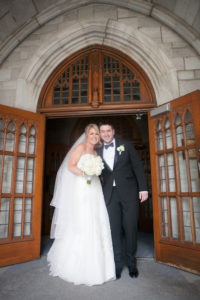 And with every downpour, must come a ray of sunshine. On July 4th, 2015, over a year after Mathieu’s accident, he and Megan wed at the Birks Chapel of the McGill Faculty Club.

This day remains a very special day to the couple for several reasons. “It still is quite difficult for everyone. On our wedding day, there were a lot of people crying because it was such a happy and rewarding moment to celebrate all that Mathieu had accomplished in one year” recalled the bride.

Megan beamed with excitement as she continued, “because of this Centre, we were able to get married and have a great life ahead of us. The honeymoon, planning for kids, moving into a house – without the MGH and its services, I don’t know if we’d be able to have all this. Our life is ahead of us and its thanks to the tireless efforts of the staff at the Montreal General Hospital.”

Despite moving forward with their lives, the Level 1 Trauma Centre at the Montreal General Hospital has stayed at the forefront of their minds.

“The staff at the MGH do so much – you wonder what can we do for them? We said, ‘Why don’t we make a donation to the General through the wedding?’ We were very happy that we were able to help out in our own way to support the Dr. David S. Mulder Trauma Centre,” said Megan.

Mathieu added, “We sensed it was the right thing to do (to give back) – it’s being able to help others who might one day need those services. If you can help others, why not?”

In April 2016, Megan and Mathieu welcomed their first born child, Beatrice – a beautiful, healthy and happy little girl who remains a daily reminder of how far they’ve come.