The Beat Goes On

In February 2020, Claire celebrated her 52nd birthday along with the implantation of her sixth pacemaker.

If six seems like a lot, it’s because it is.

Claire was an active young woman and an avid tennis player who was well on her way to a professional career when the first symptoms appeared: dizziness, lightheadedness, palpitations. She experienced these symptoms at the most unexpected and frightening moments. For example, once while driving, she had to pull-over and place her head between her legs.

Then came the day when she fainted in the middle of her tennis practice. For the doctors who had been following her case for some time, it was one incident too many, so they sent her to the Montreal General Hospital (MGH) to meet with a specialist.

At only 19 years old, Claire was diagnosed with sick sinus syndrome, a mix of atrial fibrillation, bradycardia and tachycardia. Her pulse averaged around 30 beats per minute (the average is between 60 and 80), but it could also rise to 220 for no reason. But that was not all: at night, her heart would sometimes stop beating for up to 6 seconds.

Due to the urgent nature of Claire’s diagnosis, a pacemaker was implanted in order to avoid a complete cardiac arrest. 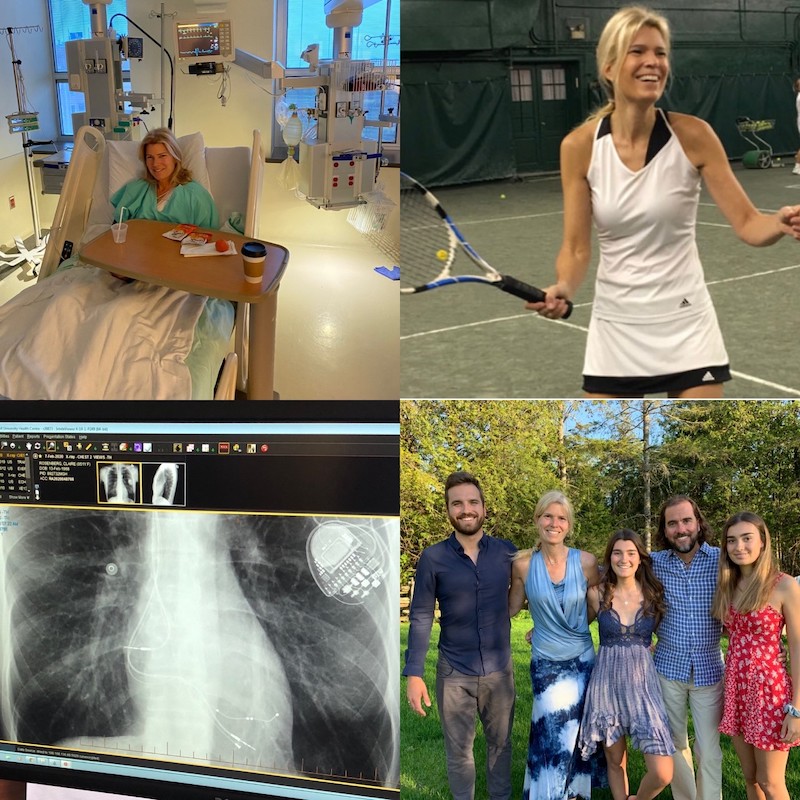 There are several explanations for the high number of devices Claire has had. First of all, the lifespan of a pacemaker is limited to about ten years. Second, given her active lifestyle, doctors needed to find a model that would allow her to continue her activities while maintaining a regular heartbeat.

Over time, Claire received care in different medical centres. However, for the last ten years or so, her case has been followed at the MGH—where she feels at home.

“The teams at the MGH have always been very proactive, both in identifying problems and finding solutions. My doctors don’t hesitate to consult their colleagues; they suggest innovative approaches. I feel really confident and, above all, well taken care of.”

Cardiovascular diseases such as arrhythmia can affect anyone at any age, and Claire is a perfect example. She was young and in the best shape of her life when she was affected by this disease.

“The majority of people who know me, they know me as the Alzheimer’s lady because I’ve been a really big advocate in Montreal for the past 15 year through Caregiver Crosswalk. But what people don’t realize about me is that behind the scenes, I’ve been advocating for my own health and my own heart.”

Because no one is immune to cardiovascular complications, it is important to have hospitals like the MGH to quickly diagnose these diseases and abnormalities, and to treat them as effectively as possible.

Fortunately, with the right teams and the right devices, it is possible for patients to return to a normal life. Just look at Claire. Although she is now 100% dependent on her pacemaker, which means that without it, her heart would no longer beat, it does not prevent her from leading a full and active life.

“I have lived a very good life. I gave birth to three children, I’m still a competitive tennis player to this day, I’m well involved in the community; all this to say that having a pacemaker should not stop anybody from living the fullest life that they can. I just had my sixth pacemaker installed and I have to say, I feel better now than ever.”

Claire considers herself lucky to be able to count on her medical teams at the MGH, who are both reliable and qualified. It is for these reasons that she wishes to support them today.

Claire decided to celebrate her birthday on February 13, 2021, by organizing an online fundraiser to support the Cardiac Electrophysiology at the Montreal General Hospital. To support her fundraiser, please click on the button below.

Make a gift to Claire's Fundraiser

By sharing her story, Claire would like to inspire others to offer their support. In addition, she hopes that others will recognize themselves in her story and get a proper consultation.

At the Montreal General Hospital, the Cardiac Electrophysiology team specializes in the diagnosis and treatment of cardiac arrhythmias. Its members do not hesitate to test new types of pacemakers or to use genetic analysis to diagnose similar problems in different family members, thus avoiding potentially fatal cardiac incidents.

Very soon, the entire Cardiology division will be moving to new facilities, bringing clinical care and ultra-specialized research together under the same roof. Research in cardiovascular genetics, availability of portable monitoring devices such as electronic watches and multi-electrode tracking vests, and the use of catheter ablation for cardiac arrhythmias are a few of the paths taken by medical teams to redefine patient care.